The moment I opened my mouth to respond was when I realised I had landed myself in some trouble. I looked the man in the eye and said;

“No.” I told him I could do without without the hijab as long as I stayed alive. I told him I didn’t want to die.

We ended up talking for about ten minutes before my friends came along and I left. He painted several scenarios where people got harmed just because of religious intolerance in the area. We discussed how I could use caps and hats as long as I was able to fit into the society.

I found hijabis on Instagram and started using my scarves to wrap different turban styles. My friends loved me. One of them was a makeup artist, she would paint my face to perfection and I literally had no worries.

Two months on, I had a new flat mate. She was a very wonderful hair stylist (and I have long tresses), it wasn’t long before she started trying out different styles on me. She was able to convince me to let her upload pictures of them (I mean, one of the best ways for her to get publicity is by uploading contents online.) She took pictures of me and put them up on her social media pages, and believe me; we got a lot of views (especially when my makeup artist friend was involved).

On my personal page, I would take pictures with my turban on halfway so that the hair could still show (without me opening my hair, lol), or I would cover my face with an emoji or something. My social media followers increased and I got a lot of commendations. I had become a model. A number of people contacted me to be a model for their hair products or to show case a style.

I did. A year went by and I had become so popular and successful in modelling that all the top shots were eager to have me on their side the hair industry. I had become so busy and distracted (or maybe I was always so tired from trying to keep up with school work and modelling) that I barely had time to remember my obligations as a Muslim. Sometimes, I’d say my prayers all together at once, sometimes I won’t at all.

But I always knew. I always knew that this was wrong. It is not what you don’t know that gets you into trouble. It is what you know for sure that you just ignore.I ignored a lot of things, my prayers, my hijab, my religion. I embraced fame and success. I was good at what I did, even without having to try so hard. I mean, who doesn’t like the good things of life?

Then I got called from home. My mother had died. Naturally, the loss of my mother came to me as a shock. She was not even 50 years yet. My father said she had a fever and was hot and shivering all night till they eventually fell asleep but by the time he woke, my mother was cold. Cold and still.

After the funeral rites, I took a long walk down the path to my mother’s office. Reminded of the time before she got her first car, I was in junior high school at the time. I would walk with my mother on the way back home and we would talk about everything. We would talk sometimes about my father, sometimes about what to have for dinner, sometimes about Islam. My mother was the regular married woman from where we came, who wore a cap and had a veil around her neck (for times of prayers) but she encouraged me to use the hijab. She would tell me stories from her childhood about her modesty and how she used the hijab until she got married to my father who didn’t want his doctor bride to be ‘all covered up’. So she did the best she could to have me educated and covered by telling me I could be whoever I wanted to be.

I had a week to reminisce a lot of my conversation with my mother. One of the things she told me was to dress the way I want people to address me. I wanted to be a Muslim, the hijabi my mother wanted me to be. I had made up my mind. At the end of the funeral leave, I went back to school in my hijab. I quit working with the agencies.

But this is hardly the end of my story. 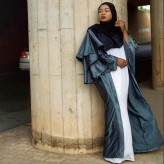 A personal space of Halima Mustapha Documenting an unapologetic journey of Self-Discovery through Faith, Fashion, Muslimah Lifestyle and just life’s simple joys. She shares all this in hope that someone some day will learn from it.